“Whether discussing his career in comedy or in public service, Franken delivers a singular experience — leaving audiences thoroughly entertained, more knowledgeable, and either optimistic or extremely depressed about our nation’s future — depending on how he feels that day,” says a press statement about the upcoming tour. 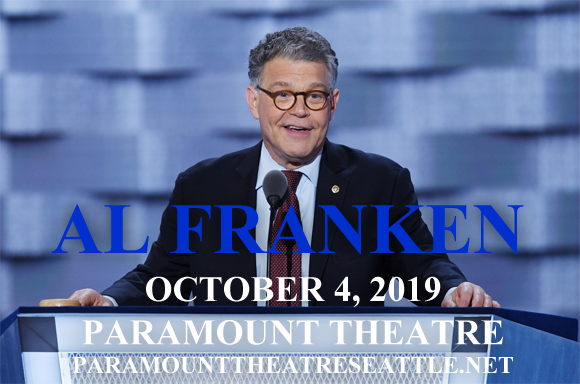 American politician, comedian, media personality, author and former US Senator Al Franken first rose to prominence in the 1970s, '80s and early-'90s as a staff writer and performer on the television comedy show Saturday Night Live (SNL), receiving seven Emmy nominations and five awards for his television writing and producing on the show. He has also authored four New York Times best-sellers, and co-wrote the film When a Man Loves a Woman, co-created and starred in the NBC sitcom LateLine, and appeared in the 2004 remake of The Manchurian Candidate. Franken served as the US Senator for Minnesota from 2009 – 2018 and was a prominent political activist on The Al Franken Show, which ran on Air America Radio from 2004 – 2007. In 2009, he was presented with the USO Metro Merit Award for his ten years of involvement with the United Service Organizations. In 2003, he served as a Fellow at Harvard's Kennedy School of Government at the Joan Shorenstein Center on the Press, Politics and Public Policy and since 2005 he has been a contributor to The Huffington Post.