The iconic sister duo, Aly & AJ, is back! With a new album slated for 2023, the duo has announced a headlining tour in support of their big comeback. Sharing an emotional new single "With Love From,", Aly & AJ is giving a taste of their new record of the same name, hinting at songs of introspection and personal tales. You can expect these powerful women to perform their biggest hits and fresh new masterpieces at the With Love From Tour 2023, with a special show at Paramount Theatre Seattle on Sunday, 2nd of April 2023. With a new album right around the corner, make sure to save your spot at the With Love From Tour by booking your tickets now! 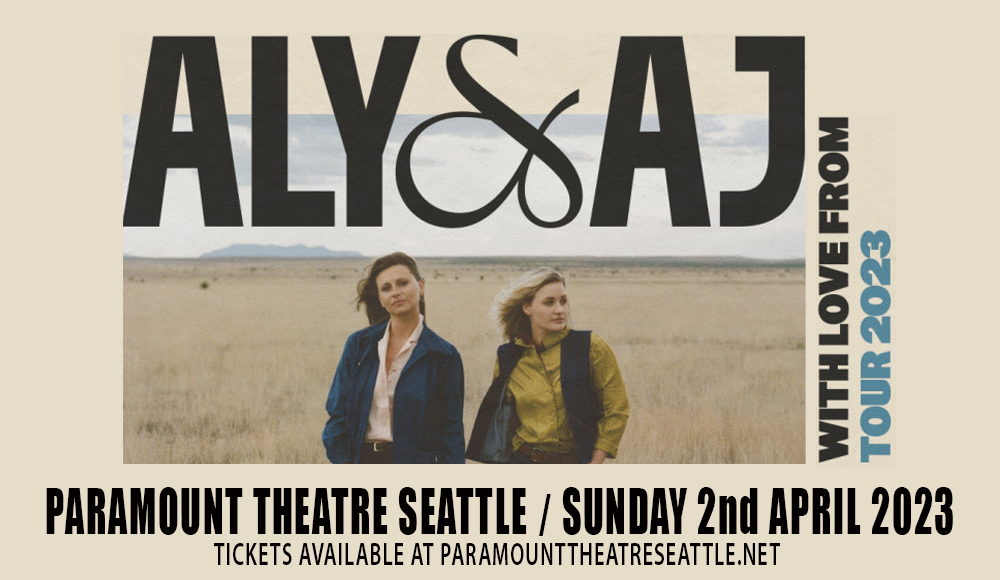 Pop-rock sister duo Aly & AJ came in strong in the mid-2000s for their rockin' tracks that hit right home. The duo's early singles "Rush", "Chemicals React", "Like Whoa", and "Potential Breakup Song" gained the world's attention for Aly & AJ's hard-hitting talent. Their first three albums have all accumulated over three million copies in sales. As critically-acclaimed artists at the time, Aly & AJ's influence was much praised.

Following their big 2021 comeback album "A Touch of the Beat Gets You Up on Your Feet Gets You Out and Then Into the Sun" which was their first album after 14 years since "Insomniatic", the sisters are set to release their new album "With Love From," in Spring 2023.

They just shared the album's title track, a raw and emotional track that gave fans a hint of introspection and reflection as a theme in their upcoming record. As the sisters gear up for the release of their new album, and the start of their big headlining tour, Aly & AJ are excited to share the record in its entirety and perform new songs and their biggest hits live on stage.

"The live aspect of our show is incredibly important to us and always has been," the sisters shared in a statement. "We’ve already started designing this tour visually and sonically and we can’t wait to deliver these songs in a live space. Some of these venues are bucket list venues for us so this tour is going to be unforgettable."

As their 2021 comeback record "A Touch of the Beat Gets You Up on Your Feet Gets You Out and Then Into the Sun" featuring its singles "Get Over Here", "Am I Alright", and "Dead on the Beach" was hailed "the feel-good album of the summer" by Vogue, their new album seems to be a much more personal serving from the two sisters, hinted by its just-released title track.

Following up a well-received and raved 2021 return as The Fader proclaimed that "Aly & AJ just keep winning", Aly & AJ is definitely the sister-duo to watch out for this coming new year.

Don't miss out on the With Love From Tour 2023 by booking your tickets now!