You've seen the video, sung the song, danced the dance and your little ones love it! Now experience all the color and fun of Baby Shark Live!, coming to Paramount Theatre Seattle on Sunday 29th March 2020! Based on the smash hit global phenomenon video that has racked up over 4.3 billion views on YouTube, this exciting and engaging stage show follows Pinkfong the fox and Hogi the hedgehog as they search for their friend Baby Shark, finding all sorts of adventure along the way! With songs, dancing and plenty of laughter, Baby Shark Live! is a joy for kids and grown-ups alike! 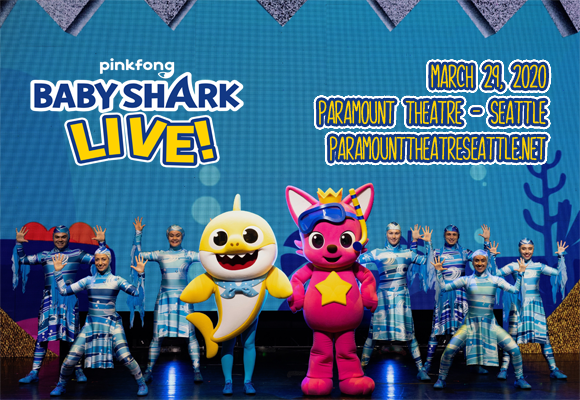 A global viral sensation, the video for South Korean education brand Pinkfong's children's song Baby Shark was released in 2016 and has garnered over four billion views on YouTube to date. The combination of fun and colorful video, a catchy and educational song aimed at pre-school children, and a dance craze, mean that Baby Shark became a worldwide sensation, and has since inspired a cereal, clothing, bedding, toys and fishing tackle, among other forms of merchandise, and the show Baby Shark Live! The 75-minute stage musical, which is based on the Pinkfong song and characters, using song and dance to teach children about shapes, colors, numbers and friendship. Both entertaining and educational, it is perfect for a little one's first theatre show.