15-time Grammy Award-winning virtuoso banjo player Bela Fleck brings My Bluegrass Heart to Paramount Theatre Seattle on Wednesday 8th December 2021! The highly collaborative 2021 album sees him paired with guitarist William Apostol, virtuoso mandolin player Sierra Hull, 10-time International Bluegrass Music Association Fiddle Player of the Year Michael Cleveland, and bassist/multi-instrumentalist Mark Schatz, who will all perform with him at this truly sensational show! Fleck is an unparalleled talent surrounded by unparalleled talent and to see him live is an opportunity to see something very special indeed! 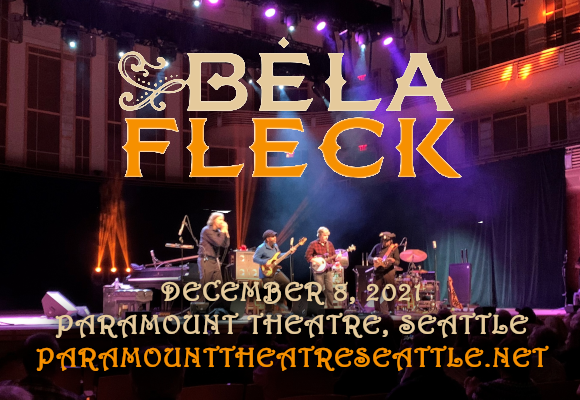 Béla Fleck is an American virtuoso banjo player. He began playing aged 15 while attending the High School of Music & Art in New York City where he initially played French horn, before moving to the choir. He became a member of the band Tasty Licks, after moving to Boston upon graduating high school, with whom he recorded two albums. Fleck released his debut solo album, Crossing the Tracks in 1979. In 1981, he formed Spectrum with bassist Mark Schatz, guitarist Glen Lawson, and mandolinist Jimmy Gaudreau. He also joined the progressive bluegrass band New Grass Revival that year, going on to play with them for nine years. Béla Fleck ad the Flecktones was formed in 1988 by Fleck, Victor Wooton, Howard Levy, and Roy “Future Man” Wooton. To date, Fleck has released 13 solo studio albums. He has won 14 Grammy Awards from 33 nominations and was inducted into the International Bluegrass Music Hall of Fame in 2020 as a member of New Grass Revival. He has been nominated in more categories than any other musician: country, pop, jazz, bluegrass, classical, folk, spoken word, composition, and arranging.