Legendary 90s rockers Candlebox have announced the news of their upcoming 2021 tour! As they make their return to the stage, fans can catch all of their biggest and much loved material in a live concert setting as they touch down at Paramount Theatre Seattle on Saturday 6th November 2021! Tickets are already selling fast so don't wait too long to secure your place in the crowd for Candlebox! 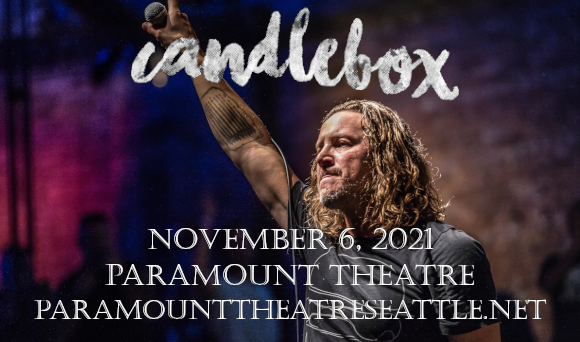 As one of the most unforgettable rock bands to come out of the 1990s, Candlebox have had a long standing career ever since, with their solid collection of six studio albums to date. Hailing from Seattle, Candlebox first transformed the scene back in 1993 as they crafted and released their self-titled studio record. The debut album included hit singles "Change" "You" "Far Behind" and "Cover Me" all of which remain to be some of their most popular songs. Candlebox became an instantly recognizable band and pretty much gained success from the get go, their single "Far Behind" took their career to the next level as it was certified, not once, not twice, not even three times, but four times platinum by the RIAA!

This major breakthrough enhanced their fan base and paved the way for Candlebox to continue on their journey making music and in 1995, they returned to the scene with their second album, Lucy. Lucy followed in similar footsteps as it grabbed an impressive gold certification and in 1998, Candlebox followed it all up with their third record, Happy Pills.

In 2000, Candlebox came to an unexpected close, after a powerful few years on the rock music scene, the band were forced to take a break due to problems with their record label. However the hiatus didn't last long as the love for their music was too strong and the Candlebox members joined their forces once again to make their return in 2006. The band spent the next two years working and developing on their fourth record and to their fans delight, Into the Sun was released in 2008. With brand new material out into the world, Candlebox were back on top and have since toured the world with their epic music.

Candlebox have hit the road along side some of the biggest names to walk the earth! Some of these artists include; Our Lady Peace, Rush, Henry Rollins, Aerosmith, Godsmack, Metallica, Radiohead, The Offspring, Sponge, Seaweed, Hinder, Suicidal Tendencies, Danzig… the list goes on.

Their steady reputation has created a wide spread international following behind them and Candlebox show no sign of stopping – come and catch them LIVE this Fall as they hit the road once again in 2021!