Evoking the spirit of the Emerald Isle in a breathtaking show that immerses the audience in the music and culture of Ireland, Grammy-nominated vocal group Celtic Woman comes to Paramount Theatre Seattle on Wednesday 18th May 2022! The four-piece will perform as part of the Postcards from Ireland Tour, which sees their contemporary spin on traditional Irish music come to life on the stage! Enthralling and lively, it;s no wonder Celtic Woman shws have been described as "Riverdance for the voice!" 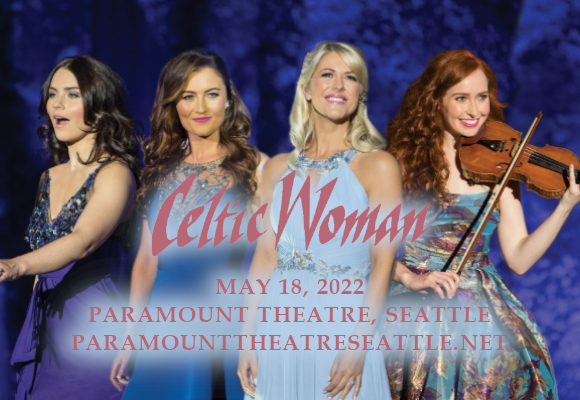 All-female Irish musical ensemble Celtic Woman was formed in 2004. The line-up has changed over the years, with the original group consisting of vocalists Chloë Agnew, Órla Fallon, Lisa Kelly and Méav Ní Mhaolchatha, and fiddler Máiréad Nesbitt. The current line-up is  Chloë Agnew, Tara McNeill, Megan Walsh, and Muirgen O’Mahony who joined the group in 2021. Over the years, the group has released eleven albums, selling over nine million records worldwide. Celtic Woman is best known for its world tours, which are big productions involving traditional Irish instruments, such as the bodhran, tin whistle and uilleann pipes, Irish bagpipers, and Irish dancers accompanying the four vocalists. Celtic Woman has been named Billboard World Album Artist of the Year six times and the group’s 2017 album Destiny was nominated at the 59th Grammy Awards in the "Best World Music Album" category.