Join Daniel Tiger along with “O” the Owl, Katerina Kittycat, Prince Wednesday, Mom and Dad Tiger and many more of your favorite characters from the beloved PBS Kids show Daniel Tiger's Neighborhood, as Daniel Tiger's Neighborhood LIVE comes to Paramount Theatre Seattle on Sunday 8th March 2020! A live and interactive musical adventure that takes our friends from the Neighborhood of Make-Believe on an exciting adventure, this magical event is perfect for your little ones first show, and fun for all the family! 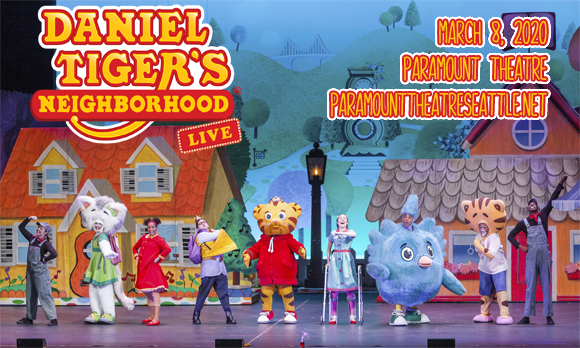 Created to promoted the legacy of beloved children's entertainer Fred Rogers, of the long-running family-oriented television series Mister Rogers' Neighborhood, Daniel Tiger's Neighborhood is an American-Canadian animated children's television series that airs on PBS Kids. The show follows the lives of Daniel Tiger (son of Mom Tiger and Dad Tiger), Katerina Kittycat (daughter of Henrietta Pussycat), Miss Elaina (daughter of Lady Elaine Fairchilde and Music Man Stan), O the Owl (nephew of X the Owl), Prince Wednesday (King Friday and Queen Sara Saturday's youngest son and Prince Tuesday's little brother) and other characters from the Neighborhood of Make-Believe as they learn life lessons and how to navigate their emotions through "strategy songs". Daniel Tiger's Neighborhood live brings this popular children's show to the stage, and is a wonderful introduction to live shows for pre-schoolers.