This fall, South African rave-rappers Die Antwoord will bring their House of Zef tour to Paramount Theatre Seattle on Thursday 12th September 2019! Get ready for a high octane show from Ninja, Yolandi and God as they bring a spirit of absolute carnage – dropping fat beats, spitting slick, curse-filled rhymes and bounding about the stage with more color and energy than a cartoon on speed! If the rumors are true, this may be Die Antwoord's last ever tour, so don't miss your chance to see this unique hip hop project live! 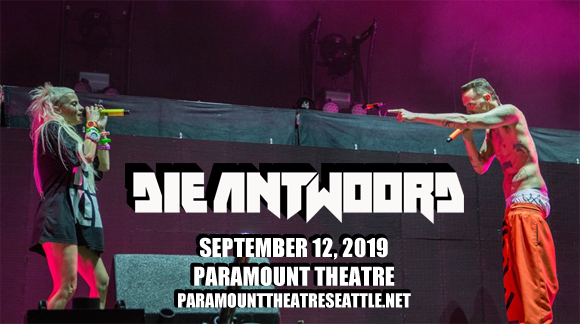 Composed of rappers Ninja and Yolandi Visser and producer god (formerly known as DJ Hi-Tek), Die Antwoord are a South African rave-rap group formed in Cape Town in 2008. Attracting attention with their free-download debut album $O$ and the music video for their single "Enter the Ninja", the group signed with Interscope Records in 2010. They left the label the following year after a dispute and started their own record label, Zef Recordz, through which they released their second album, Ten$ion (2012). The album launched the singles "Fok Julle Naaiers": "I Fink U Freeky", "Baby's on Fire", and "Fatty Boom Boom", and brought their music to an international audience. Their third and fourth studio albums, Donker Mag (2014) and Mount Ninji and Da Nice Time Kid (2016), were also released on Zef Recordz. Die Antwoord's fifth and final album, House of Zef, will be released this year.