International Queen of Burlesque, fashion icon, entrepreneur and all-round superstar Dita Von Teese comes to Paramount Theatre Seattle on Wednesday 12th August 2020! The achingly alluring burlesque sensation is touring her Glamournatrix revue, which sees the seductive siren perform a variety show with more sass, sophistication and Swarovski crystals than you've ever seen before! This whimsical, tantalizing, bountifully lavish show brings you all the ritz and glitz that you'd expect from the world's biggest burlesque luminary, and will leave you satisfied yet still wanting more! 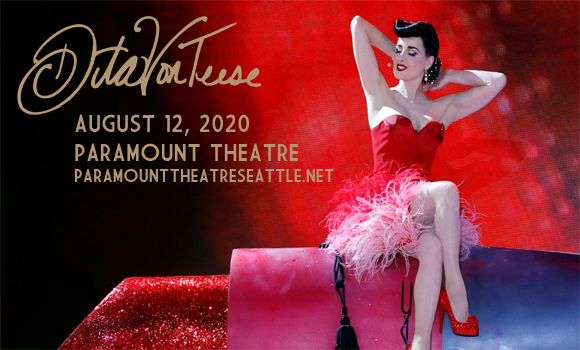 The “Queen of Burlesque”, Dita Von Teese repopularized a dying art-form and brought a much-needed injection of sophisticated glamour to the late-1990s and 2000s with her 1930s and 1940s-inspired neo-burlesque routines, the most famous of which involves a giant martini glass. Born Heather Sweet, Von Teese trained as a ballet dancer as a child, and began modelling and working in a local strip club at the age of 18. Disappointed and disillusioned by the lack of creativity shown by the other dancers, she began her own burlesque review, which became hugely popular. News of her talents spread far and wide, and Von Teese went on to become a trailblazer and cult celebrity, appearing in fashion shows for designers like Vivienne Westwood and Jean-Paul Gaultier, and in underground independent films, like The Death of Salvador Dali and The Boom Boom Room. Her profile was heightened even further with a short-lived marriage to singer Marilyn Manson, and appearances in a variety of music videos by artists such as Manson, Green Day and Die Antwoord. It is said that Von Teese "puts the tease back into striptease," and her routines are known for their elaborate costumes and props, some of which include: a carousel horse, a giant powder compact, a filigree heart and a clawfoot bathtub with a working shower head.