She's a writer, producer, author, podcast host and possibly the funniest comedian touring right now, Iliza Shlesinger comes to Paramount Theatre Seattle on Friday 24th September 2021 on her Forever Tour! The inspired yet relatable comic has wowed home audiences with her five Netflix specials – War Paint (2013), Freezing Hot (2015), Confirmed Kills (2016), Elder Millenial (2018) and her most recent, Unveiled (2019) – but nothing compares to the electricity of live stand-up and the connection you feel when you're sharing belly laughs with a whole crowd of people! Make sure you catch this trailblazing comic when she's in town – you won't regret it! 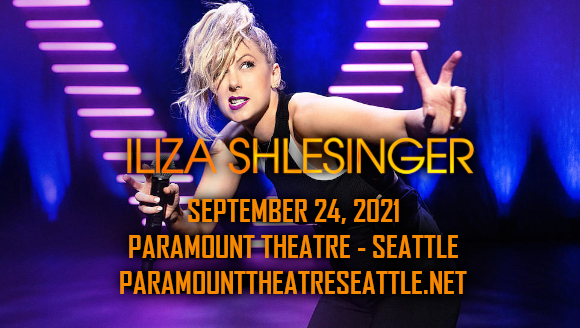 One of the US' top comedians, Iliza Shlesinger began her love affair with comedy at college, where she honed her performance skills with one of the campus' comedy sketch groups, Jimmy's Traveling All Stars. Upon moving to LA in 2007, she joined the Whiteboy Comedy troupeand began regularly performing with them at notable comedy club The Improv in Hollywood. Later that year, Shlesinger won Myspace's So You Think You're Funny contest and was featured as the G4 network's Myspace Girl of the Week. She continued her winning streak the following year, when she won the sixth season of NBC's Last Comic Standing. This served as her big break and opened the door to television work, including E! Network's Forbes Celebrity 100, TV Guide's America's Next Top Producer, Comedy Central Presents, John Oliver's New York Stand Up Show, Byron Allen's Comics Unleashed, and History Channel's History of a Joke. Now, not only does Shlesinger sell out venues both nationally and internationally, but she has released five Netflix specials – War Paint (2013), Freezing Hot (2015), Confirmed Kills (2016), Elder Millenial (2018) and Unveiled (2019) – through which she has become a household name. In 2017, she authored the book Girl Logic: The Genius and the Absurdity.