Hilarious, frank, irreverant and politically-charged, Jim Jefferies is a comic revelation and a must-see live act! The Aussie-American performer and TV show host will be bringing his ascerbic and topical Night Talker Tour to Paramount Theatre Seattle on Friday 15th November 2019 for a night of no-holds-barred comedy! Tackling politics, current events and observations with deft and self-assured wit, Jefferies is guaranteed to have you belly-laughing all night long! 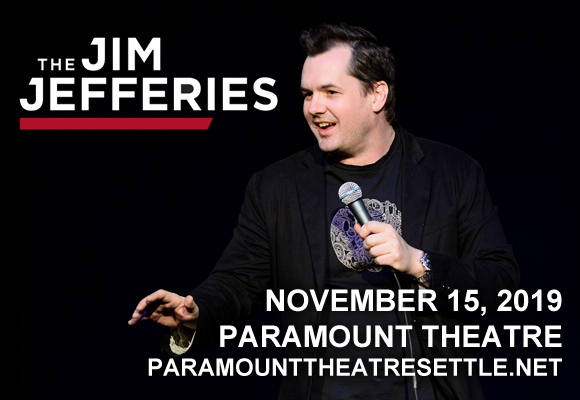 After several years working the comedy circuit in Australia, Australian-American stand-up comedian, political commentator, actor, and writer Jim Jefferies first came to public attention in 2007 after a member of the public attacked him on stage at the Manchester Comedy Store. Subsequently, Jefferies began using footage from the event as part of Contraband, his 2008 comedy tour and live DVD special. His introduction to an American audience came the following year with his debut HBO special I Swear to God. Jefferies has continued to build on his international popularity over the years, performing at at several festivals around the world, including the Edinburgh Festival Fringe, Just for Laughs Festival, Melbourne International Comedy Festival, Reading and Leeds Festivals and the Glastonbury Festival. From 2013 – 2014, he starred in his own FX sitcom, Legit, which he also created, and since 2017 he has hosted the Comedy Central late-night talk and news satire television program The Jim Jefferies Show. Jefferies has released seven stand-up comedy specials to date, his most recent being 2018's Netflix special Jim Jefferies: This Is Me Now.