Neo-traditional country artist Jon Pardi is bringing his headlining tour to Paramount Theatre Seattle on Thursday 24th October 2019! Pardi, who will be joined by special guest Riley Green in support, will be performing material from his upcoming album (his first since 2016), including his latest single!

“The single ‘Heartache Medication’ has an ’80s George Strait ‘Fool Hearted Memory’ feel to it, and is something people can dance to,” says Jon. “That’s something I really wanted for this album. There really are no sad songs on this record—it covers a range of subjects, but is ultimately about moving on, and having a good time.” 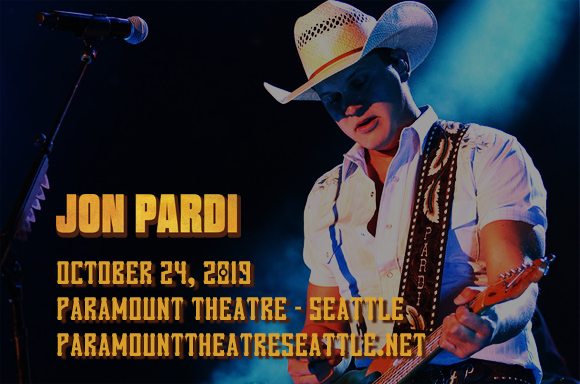 American neotraditional country music singer, songwriter, and record producer Jon Pardi began writing songs and performing at a young age, moving to Nashville straight after finishing high school to pursue a music career. Signed to Capitol Nashville, Pardi toured as an opening act for label-mate Dierks Bentley in 2010 and two years after, he released his debut single, "Missin' You Crazy". The single peaked at number 29 on the U.S. Billboard Hot Country Songs chart and was followed by "Up All Night", which was released the following year and scored Pardi his first top ten hit. He released his debut album, Write You a Song, in 2014, which peaked at number three on the Top Country Albums chart and at number 14 on the Billboard 200. His second studio album, California Sunrise, was released in 2016 and peaked at number one on the Top Country Albums chart and number 11 on the Billboard 200, launching the singles "Head Over Boots", "Dirt on My Boots", "Heartache on the Dance Floor", "She Ain't in It", and "Night Shift".