Despite being renowned for their big harmonies, Little Big Town are touring on a slightly smaller scale than usual this year as they bring their intimate Nightfall tour to theatres across North America in support of their new album! The Nashville quartet comes to Paramount Theatre Seattle on Thursday 9th April 2020 for the first of two nights, where they'll be performing tracks like "Over Drinking," "The Daughters" and "Girl Crush"! They'll be joined by Caitlyn Smith in support! 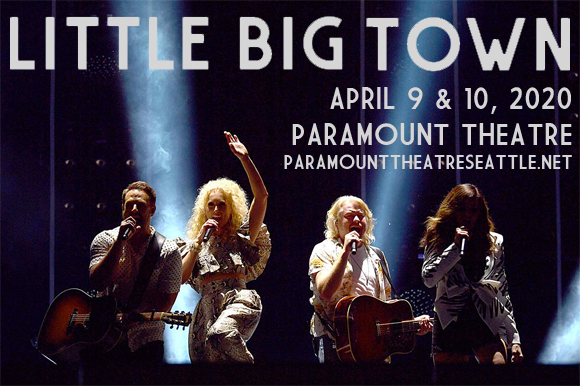 Country vocal quartet Little Big Town was initially formed in the late-1990s by Georgia natives Karen Fairchild and Kimberley Chapman, who met in 1997 at Alabama's Samford University and both moved to Nashville, Tennessee post-college, where they reconnected. Next to join the group was Jimi Westbrook, a friend of Fairchild's then-husband, who joined in 1998, with Phillip Sweet making the trio into a quartet one year later. In 2000, the group signed its first record deal with Mercury Nashville Records, but despite minor success with the singles "Don't Waste My Time" and "Everything Changes" (from their 2002 eponymous debut album), the deal was short-lived. The band's mainstream breakthrough finally came in 2005 when they signed to Clint Black's Equity Music Group and released their second studio album, The Road to Here. The album was a commercial hit, gaining platinum certification from the RIAA and paving the way for a plethora of hit singles for the group, including the number one hits "Pontoon", "Girl Crush", and "Better Man" and the top 10 hits "Boondocks", "Bring It On Home", "Little White Church", "Tornado", and "Day Drinking".