It's been a long wait for Louis Tomlinson fans, but the British singer, who released his debut solo single, "Just Hold On" with Steve Aoki, in 2016 comes to Paramount Theatre Seattle on Thursday 3rd March 2022 on his debut headlining world tour! The One Direction singer is the last of the bunch to release a solo album, but fans have been delighted with his fantastic singles "Two of Us", "Kill My Mind" and "We Made It", which he'll be performing live on stage! 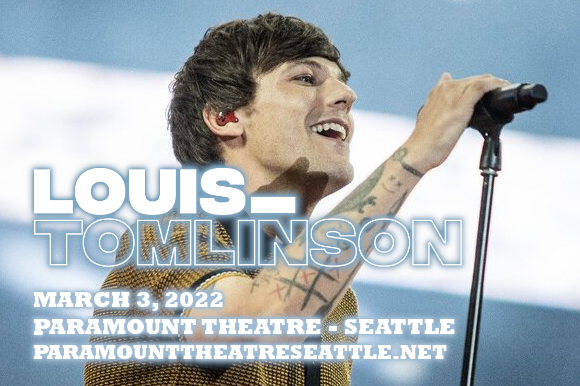 Louis Tomlinson is a British singer and songwriter who rose to fame as part of the boy band One Direction. He first appeared on the British reality television singing competition X Factor in 2010, primarily auditioning as a solo artist, and joined the group over the course of the series. The band came third in the competition, but became hugely successful, becoming the first band in the U.S. Billboard 200 history to have their first four albums debut at number one. They released five studio albums together as a group, and won nearly 200 awards, including seven Brit Awards, four MTV Video Music Awards, six Billboard Music Awards, seven American Music Awards (including Artist of the Year in 2014 and 2015), and 28 Teen Choice Awards, before disbanding in 2017. Tomlinson began pursuing his solo career in 2016, releasing his debut single with Steve Aoki, "Just Hold On", which debuted at number two on the UK Singles Chart and reached number one on the Billboard Dance/Electronic Digital Song Sales chart. Tomlinson released his debut solo album, Walls, in 2020.