Alternative country singer-songwriter Neko Case brings her intimate lyrics and whirlwind voice to Paramount Theatre Seattle on Thursday 29th November 2018 as part of her Hell-On Tour! Bringing tracks from her incredible new album to the stage, Case shows her ever-present strength as a both a singer and songwriter, as well as her phenomenal aptitude for performance. This is real music for real music-lovers! Tickets on sale now! 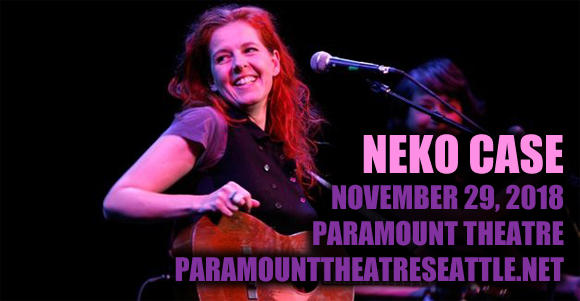 American singer-songwriter Neko Case began her music career while at college in Vancouver in the mid-1990s, playing drums for various local bands including the Del Logs, the Propanes, the Weasels, Cub, and Maow. It was during this time that she first collaborated with Canadian indie rock band The New Pornographers, recording vocals for several tracks on their debut album Mass Romantic. Her debut solo album (recorded under the name Neko Case and her Boyfriends), The Virginian, was released in 1997 and embraced her love of country music. Over the years, Case has continued to guest as a featured lead vocalist on several releases from The New Pornographers. She also released a collaborative album alongside fellow country artists KD Lang and Laura Veirs in 2016 titled case/lang/veirs. As a solo artist, Case has released seven albums. Her 2009 album Middle Cyclone was nominated for Best Contemporary Folk Album and Best Recording Package (with Kathleen Judge) at the 52nd Annual Grammy Awards in 2010, and her 2013 album  The Worse Things Get, the Harder I Fight, the Harder I Fight, the More I Love You was nominated for Best Alternative Music Album at the 56th Annual Grammy Awards. Her most recent studio album, Hell-On, was released in June 2018.