Prepare to be dazzled, shocked and totally amazed by the incredible feats of magical duo Penn & Teller! Utterly unique in the world of magic, this sensational pair have redefined the art-form, bringing a tantalizing mix of comedy, skepticism and just a hint of fantasy violence to the table, keeping everyone on the edge of their seat! Penn & Teller are coming to Paramount Theatre Seattle on Friday 30th November 2018, so book your tickets now for the night of your life! 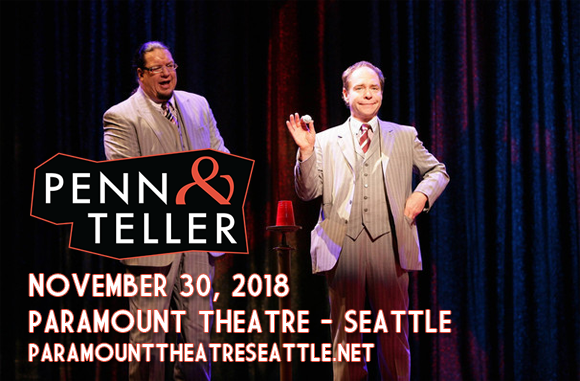 American magicians and entertainers Penn and Teller are a comedy and magic double act that first began performing together in the 1970s as part of a trio with fellow performer Weir Chrisemer. Chrisemer left the act in 1981 and the two continued as a duo. Four years later, the pair were a critically acclaimed magic act, receiving rave reviews for their  Off Broadway show and Emmy Award-winning PBS special, Penn & Teller Go Public. The late 1980s and early 1990s brought a host of television appearances for the twosome, including Late Night with David Letterman, Saturday Night Live, The Tonight Show with Jay Leno, Late Night with Conan O'Brien, Today, and others, as well as several national tours. In the late 1990s they also began to appear as guests on a variety of popular shows including the Drew Carey Show, Muppets Tonight, Home Improvement, Sabrina the Teenage Witch, The Simpsons, Futurama and more. Penn and Teller had their own television show, Bullshit!, which ran on Showtime from 2003 – 2010. Since 2011 they have starred in the magic competition television program Fool Us. They are also the longest running headlining act in Las Vegas history and currently perform in Las Vegas at The Rio.