How can such a young artist, barely in his twenties, encapsulate the sound of music that's like crisscrossing through different eras? That's the genius of Rex Orange County! With his sweeping sleeper hit "Loving Is Easy", what's not to love about this guy? Well, one thing you'd definitely love to hear is that he's now on tour and is hitting the live concert stage of the Paramount Theatre Seattle on Tuesday 21st January 2020. His music may give you that chill, carefree vibe, but mind you, there are a gazillion of excited fans out there grabbing tickets while you're reading this. Now get giddy and book your tickets right here, right now! 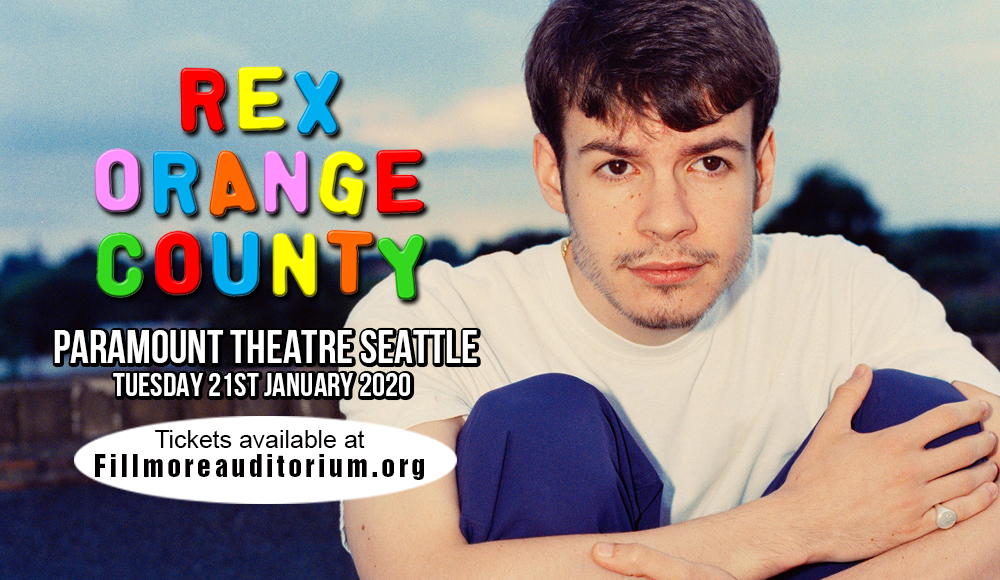 Loving Rex Orange County is easy… this guy's music can make you think you're in a time warp. His brand of indie-pop can make you feel like a crossing between the sound trip of a hippie and a hipster. His neo-soul style can make you wonder whether you're in the swinging seventies or the sophisticated age of social media. You can't quite make out the difference whether you're hearing it on radio or stereo or Spotify. Rex OC's music is timeless, ageless, boundless… it's just for everyone to enjoy with no fear of judgment.

As he was raised listening to Queen, ABBA, Green Day, and Weezer, along with more classical soulful artists, like Stevie Wonder who also inspired him, Rex Orange County is a multi-instrumentalist — a drummer, self-taught pianist, and learned to play the guitar at age 16.

Rex Orange County's music is often classified as indie-pop, neo-soul, alternative hip hop, blue-eyed soul. For him, he simply describes it as "rough around the edges and lo-fi." With his millions of listeners on streaming sites like Soundcloud and Spotify, and numerous views on YouTube, Rex OC is eyed as one of fastest rising stars on pop planet as he rocket-launched as a string of stellar hits which include "Loving is Easy", "Best Friend", "Sunflower" .

And with those hits tucked under his belt, Rex feels validated that he's on the right track. "I don’t want to do anything else with my life," he says. "This is the perfect job. I’m also aware that it’s brutal, and that’s where the pressure comes from – I know that people need to love it for this to continue”.

No doubt about it, for an insanely talented artist such as Rex Orange County, this show would surely be a blast. Don't miss it! Book your tickets now!