Come back in time to Within Our Gates, the roaring 20s, the days of Jim Crow, the new revival of the Ku Klux Klan and the migration of blacks to the cities of the North and Midwest. Within Our Gates is the oldest surviving film by Oscar Micheaux. Silent Movie Mondays Presents Within Our Gates at Paramount Theatre Seattle on Monday 21st October 2019 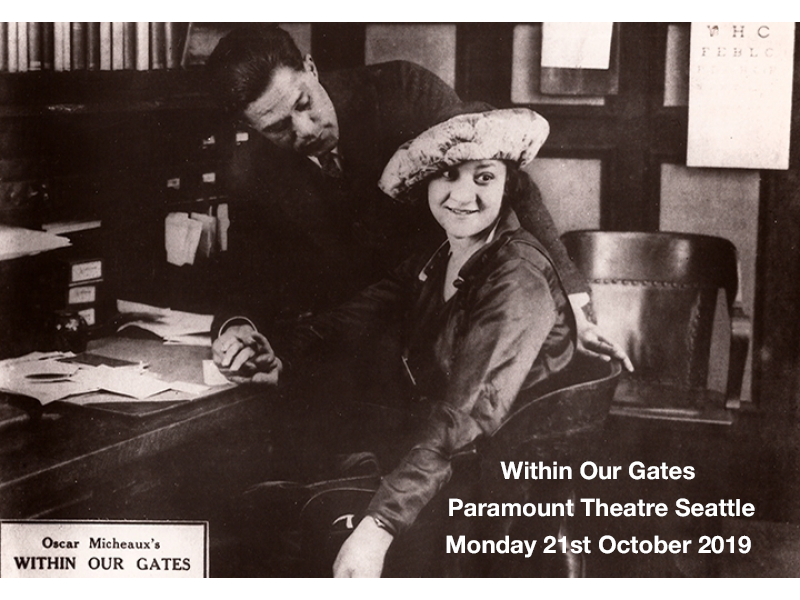 The story goes, An African-American woman travels north in an effort to raise money for a rural school for poor African-American children in the deep south, Involving romance with a Doctor, revelations about her mixed European ancestry and racial violence and lynching’s under white supremacy.

Micheaux's movie has been considered by critics as a response to Griffiths The Birth of a Nation. The film's portrayal of lynching shows "what Blacks knew and Northern Whites refused to believe", turning the "accusation of 'primitivism'… back onto White Southern culture". Micheaux's movie is the second movie to be made by him using borrowed costumes and props and without any opportunity to re-shoot any scenes.
Within Our Gates initially was rejected by the Board of Censors in Chicago when Micheaux submitted the film in December 1919. "This is the picture that required two solid months to get by the Censor Boards. Those who reasoned with the spectacle of last July in Chicago ever before them, declared the showing pre-eminently dangerous; while those who reasoned with the knowledge of existing conditions, the injustices of the times, the lynching’s and handicaps of ignorance, determined that the time is ripe to bring the lesson to the front.” – Chicago Defender, January 17, 1920, referencing the riots earlier in December 1919 in Chicago. New Orleans, and other cities objected for similar reasons when they blocked the screening of the film or demanded that those scenes be cut.
It is considered an important expression of African-American life in the years immediately following World War I, when violent racist incidents occurred throughout the United States, but most frequently in the South. In 1992, Within Our Gates was selected by the Library of Congress for preservation in the United States National Film Registry as being "culturally, historically, and aesthetically significant".