The War On Drugs Tickets

Philadelphia indie rockers The War On Drugs come to Paramount Theatre Seattle on Monday 21st February 2022 on the I Don't Live Here Anymore Tour, promoting their fifth studio album of the same name! Granduciel and co. have described the record as an “uncommon rock album about one of our most common but daunting processes—resilience in the face of despair,” which is a feeling many can relate after the past year! Catch them with their first new music in four years, including single ‘Living Proof’! 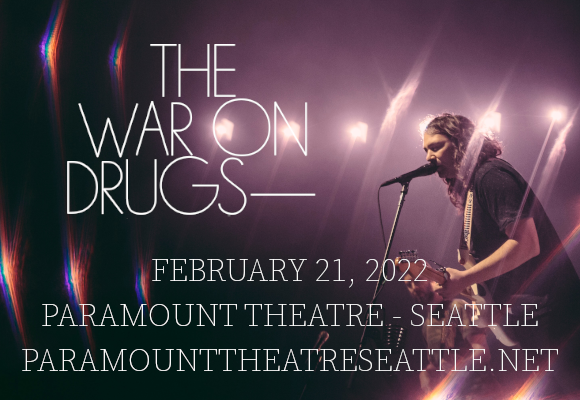 Formed in Philadelphia, Pennsylvania in 2005 by Adam Granduciel and Kurt Vile, The War on Drugs now consists of Granduciel (vocals, guitar), David Hartley (bass guitar), Robbie Bennett (keyboards), Charlie Hall (drums), John Natchez (saxophone, keyboards) and Anthony LaMarca (guitar). The band’s debut studio album, Wagonwheel Blues, was released in 2008 and the band toured the release in Europe. Not long after, Vile left the band to focus on his solo career and the group went through a number of line-up changes. 2011 brought the release of the group’s second album, Slave Ambient, which was acclaimed by critics and reached number four on the Billboard Heatseekers Albums chart. Lost in the Dream followed in 2014 and debuted at number 26 on the Billboard 200. A most introspective record than those previous, it was a huge hit with critics and appeared on several end-of-year lists of the best albums. The War On Drugs signed with Atlantic in 2015 and released its fourth studio album, A Deeper Understanding, in August 2017. The album reached number 10 on the Billboard 200 and won  Best Rock Album at the 60th Annual Grammy Awards in 2018. The band’s fifth studio album, I Don’t Live Here Anymore, is released in October 2021.