The War On Drugs Tickets

Due to popular demand, The War On Drugs comes to Paramount Theatre Seattle on Tuesday 22nd February 2022 for the second night in a row! Playing from their new album, I Don't Live Here Anymore, the indie rockers will be doing what they do best – combining Grammy Award-level music with honest, introspective lyricism that draws in every listener. Now, fans get to enjoy the new material live for the first time, hearing tracks like recent single “Living Proof!” 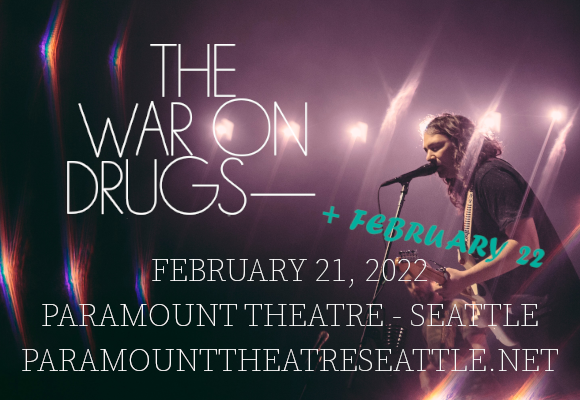 Formed in Philadelphia, Pennsylvania in 2005 by Adam Granduciel and Kurt Vile, The War on Drugs now consists of Granduciel (vocals, guitar), David Hartley (bass guitar), Robbie Bennett (keyboards), Charlie Hall (drums), John Natchez (saxophone, keyboards) and Anthony LaMarca (guitar). The band’s debut studio album, Wagonwheel Blues, was released in 2008 and the band toured the release in Europe. Not long after, Vile left the band to focus on his solo career and the group went through a number of line-up changes. 2011 brought the release of the group’s second album, Slave Ambient, which was acclaimed by critics and reached number four on the Billboard Heatseekers Albums chart. Lost in the Dream followed in 2014 and debuted at number 26 on the Billboard 200. A most introspective record than those previous, it was a huge hit with critics and appeared on several end-of-year lists of the best albums. The War On Drugs signed with Atlantic in 2015 and released its fourth studio album, A Deeper Understanding, in August 2017. The album reached number 10 on the Billboard 200 and won Best Rock Album at the 60th Annual Grammy Awards in 2018. The band’s fifth studio album, I Don’t Live Here Anymore, is released in October 2021.