Nothing quite beats the thrill of seeing a professional and iconic showman at work, and with Tony Bennett, that's exactly what you get! Performing at Paramount Theatre Seattle on Saturday 7th September 2019 as part of his I Left My Heart Tour, the 92-year-old crooner will be singing all the hits from his prolific and illustrious career, including the tour's namesake, and he'll be joined by a very special guest support act – his daughter, Antonia Bennett! 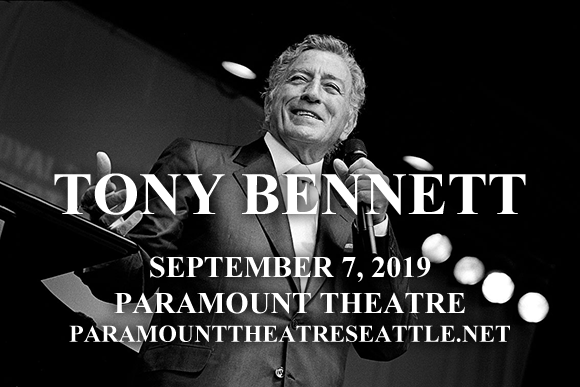 Tony Bennett is one of the world's most iconic purveyors of traditional pop music. With 19 Grammy Awards (including a Lifetime Achievement Award, presented in 2001) and two Emmy Awards to his name, Bennett has come a long way from his initial pop crooner days in the 1950s. After a decade of chart-topping hits, Bennett established himself as a nightclub singer, and found himself enjoying global recognition with his now-signature 1962 hit "I Left My Heart in San Francisco", which won Grammy Awards for Record of the Year and Best Male Solo Vocal Performance. The 1990s were a period of resurgence for Bennett, when he appeared as a guest of several television programs throughout the decade, including Late Night with David Letterman, Late Night with Conan O'Brien, The Simpsons, Muppets Tonight, and several MTV programs. MTV Unplugged: Tony Bennett, his 1994 live album, went platinum and won him the Best Traditional Pop Vocal Performance Grammy award for the third straight year, as well as the Grammy Award for Album of the Year. In 2014, the now-octogenarian Bennett found appeal with yet another a new generation when he collaborated with Lady Gaga on the Grammy Award-winning album Cheek to Cheek, which debuted at number one on the Billboard 200. Bennett has sold over 50 million records worldwide throughout his lengthy career.