'But if you close your eyes, does it almost feel like nothing changed at all? As the world heals and stages around the country open up, the future of live music is shining brighter than ever. The English pop-rock band behind ear-catching and chart-topping hit songs "Pompeii" and "Happier" with Marshmello, Bastille, is back to hit the road as they embark on their "Give Me The Future" tour, stopping by at Paramount Theatre Seattle on Tuesday, 24th of May 2022 in support of their upcoming album "Give Me The Future" dropping real soon. The band just released their latest single "Shut Off The Lights", teasing the much-awaited "wildly ambitious" new album described by the band "…as playful as it is thought-provoking, as dystopian as it is dancefloor-friendly and as electronic as Bastille have ever been". Your favorite hits, emotional dancefloor bops, and brand-new music by the one and only Bastille back on the stage. Book your tickets now! 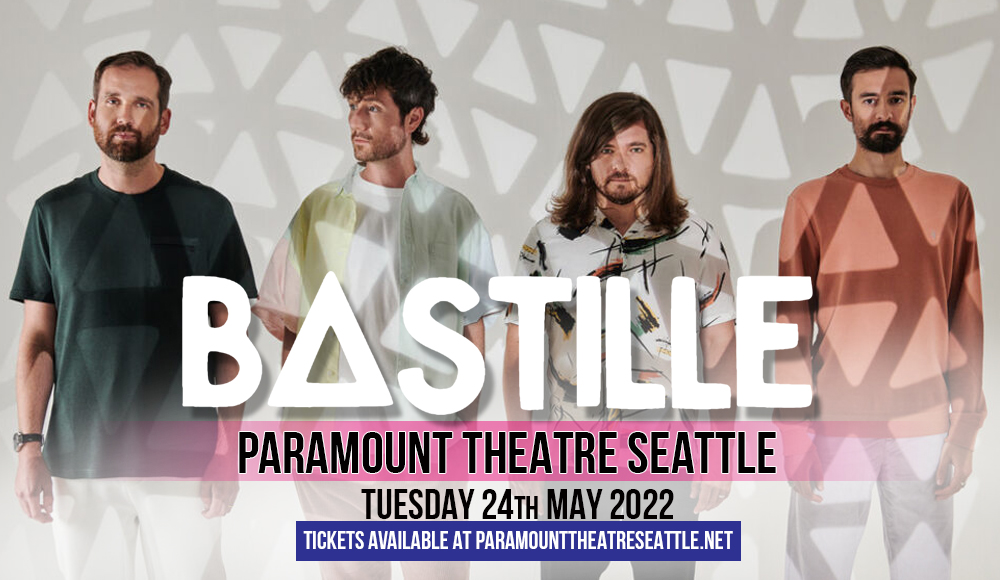 Formed in 2010, band members Dan Smith, Kyle Simmons, Will Farquarson, and Chris "Woody" Wood, caught the attention of Alex Baker, presenter of indie artists on Kerrang! Radio. As they started to find and grow an audience, the band dropped their debut EP "Laura Palmer" by 2011, and later on signed with Virgin Records.

From then on, Bastille skyrocketed to fame and dropped their certified 3x platinum awarded debut album "Bad Blood" featuring the multi-platinum worldwide hit single "Pompeii". Other singles include "Bad Blood", "Flaws", "Laura Palmer", and "Things We Lost in the Fire", all of which are certified-gold awarded. By 2016, they dropped their second #1 album "Wild World" which featured the hit single "Good Grief", and by 2019 their third album "Doom Days".

As the new year rises, Bastille is set to release their fourth studio record "Give Me The Future" dubbed as their most ambitious record yet, expected to reach fans' ears by February 4th. The band has been teasing the much-awaited album over the past year giving fans a taste with new singles such as "Distorted Light Beam", "Thelma + Louise", "Give Me The Future", and 2022's fresh new single "Shut Off The Lights".

Dan Smith says that “‘Shut Off The Lights’ is about being pulled out of your future-fearing anxieties by the person you’re lying next to…It’s a fun, real, human moment in the middle of this big album".

"It’s as playful as it is thought-provoking, as dystopian as it is dancefloor-friendly and as electronic as Bastille have ever been” as Bastille describes their soon-to-be-released new album.

It's time to 'shut off the lights, close your eyes, and dream of a perfect night singing along with the crowd to Bastille's mega-hits, fan-favorite tracks, and fresh new music from their brand new album "Give Me The Future" live on stage. But first, book your tickets now!