Dead Can Dance, aka Brendan Perry and Lis Gerrard, are back with their first album in six years! The duo comes to Paramount Theatre Seattle on 3rd May 2021, along with their band, to celebrate the release of the long-awaited Dionysis! The neoclassical dark wave pioneers are known for their goth-tinged, world and classical influenced tracks, which showcase ethereal vocals whilst remaining grounded in heavy sounds. Expect atmospheric, ambient soundscapes from these veteran visionaries! 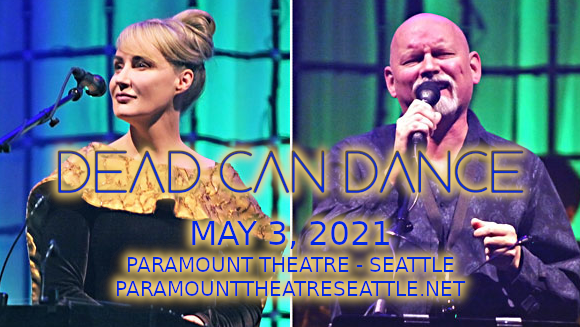 Formed in 1981 in Melbourne, Australia by vocalists and multi-instrumentalists Lisa Gerrard and Brendan Perry, Dead Can Dance is an Australian-British musical project. The duo came to prominence in the early 1990s with their genre-defying music, which takes influence from classical and world music, as well as new wave post-punk and goth. Their breakthrough album is 1993's Into the Labyrinth, which was their first to chart on the Billboard 200. The group disbanded in 1998, but embarked upon a world tour together in 2005 and reformed officially in 2011, coming back with a new album, Anastasis, in 2012, along with a world tour. Their most recent album, Dionysis, was released in 2019.