Theatrical metallers In This Moment have teamed up with Black Veil Brides for the co-headlining In-Between Tour, which comes to Paramount Theatre Seattle on Thursday 14th October 2021! The tour is in support of In This Moment's upcoming album Mother, and the two headline acts will be joined by support guests DED, and Raven Black!

“We are so very excited to announce our first 2020 tour with our friends who are back with a vengeance the one and the only Black Veil Brides. Also joining us is the incredibly talented Ded who will be bringing new exciting stuff to the tour and Raven Black. This March the rituals begin with new music from our up and coming album Mother.” 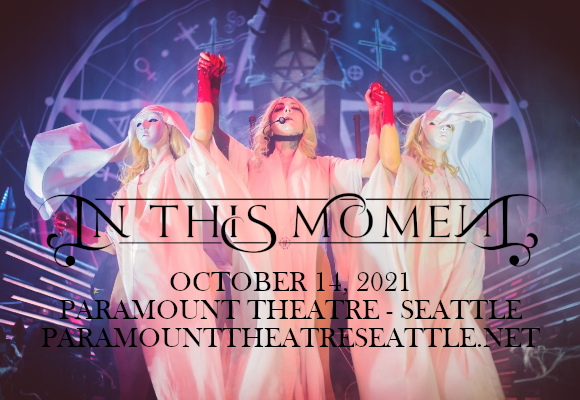 Originally known as Dying Star, alternative metal band In This Moment was formed in Los Angeles, California in 2005 by vocalist Maria Brink and guitarist Chris Howorth, who have remained the band's two most consistent members throughout their career. The group made its debut in 2007 with the album Beautiful Tragedy. Over the years, the band has become popular on the metal scene, appearing at rock and metal festivals around the globe and touring with a number of prominent metal bands. They have released six studio albums to date, with their fourth and fifth albums reaching number 15 and eight on the Billboard 200, respectively. Their seventh studio album, Mother, is slated for release in 2020.