Join Wayne, Daryl, Katy, Dan and Coach for Letterkenny Live, coming to Paramount Theatre Seattle on Wednesday 16th March 2022! Featuring never-before-seen sketches and video performed by the cast, as well as original stand-up sets from K. Trevor Wilson (Dan) and Mark Forward (Coach), Letterkenny Live is a must for any fan of the hilarious Canadian show! A 90-minute comedy show that will have you rolling in the aisles, Letterkenny Live is your chance to see all your favorite characters from the award-winning series in the flesh! 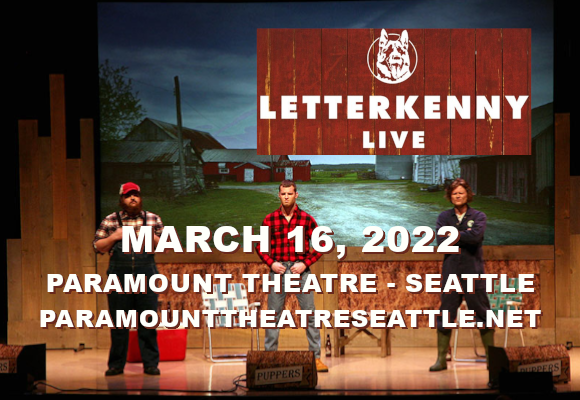 Letterkenny is a Canadian sitcom that revolves around the antics of the residents of a small rural Canadian community of the same name. The show began as a web series on Youtube and was commissioned as a TV show by Crave in 2015, and also airs on The Comedy Network. The show is distributed by Hulu in the US. The sitcom was created by Jared Keeso and developed and primarily written by Keeso and Jacob Tierney, who directs the show. The show has run for seven seasons to date, as well as airing several holiday-based specials, and in 2019, Bell Media announced the launch of a six-episode animated spin-off called Littlekenny. The series won the award for Best Comedy Series at the 5th Canadian Screen Awards in 2017.