A decade since the release of their debut album, Slash & Myles Kennedy and The Conspirators has dropped a brand new taster single, signalling the release of a new album and an accompanying tour titled “The River is Rising”, slated for a release date of February 11, 2022. Yet as early as the 9th February 2022, Wednesday, Slash & Myles Kennedy and The Conspirators will takeover the Paramount Theatre Seattle stage for their much-awaited concert. Lauded as one of the greatest guitarists of all time, Slash is now giving fans double-doses of anticipation in 2022. Yet none of these fans is taking this sitting down; they're snagging tickets as early as now! Don't wait 'til the last minute. Excitement is on the rise so book your tickets now! 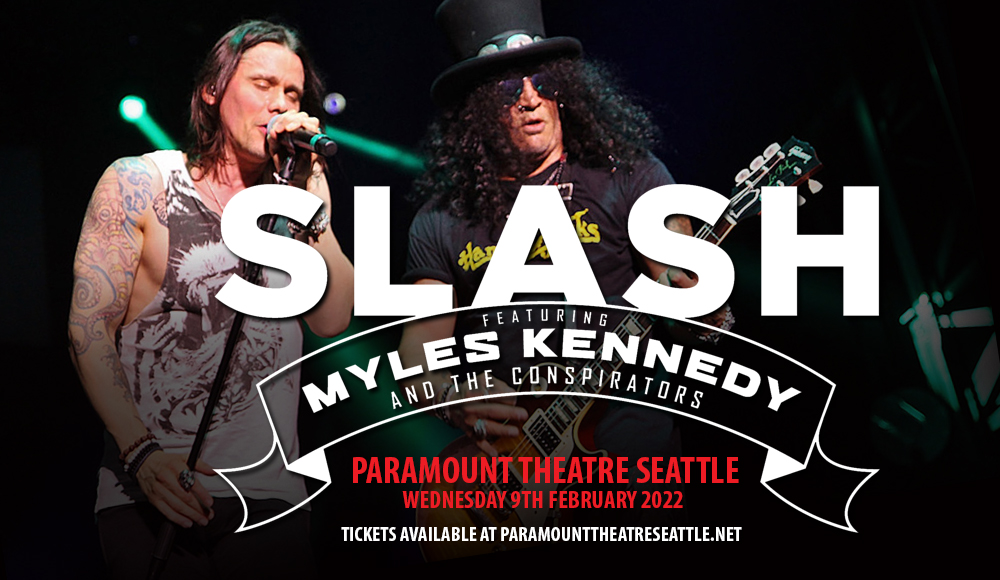 A taster new single from an up-and-coming album plus an unveiling of massive headliner North American tour dates has spurred a rising wave of excitement among fans of Slash & Myles Kennedy and The Conspirators. The release of the single "The River Is Rising" marks the first new music release in three years from Slash. The album is pegged for a February 11, 2022 release date, which begs the question among fans to ask if the album was made during the lockdown?

​“There’s two or three songs on the record that were written during the pandemic; everything else was written before. The River Is Rising was one of the last songs I wrote before we started pre-production, and because it was so fresh and has a certain groove and energy to it, it was the first thing we really attacked; says Slash.

He further adds, “It’s the newest song on the record, and as for the double-time part, that was something that I came up with and tagged onto the end of the arrangement. Then when we were over at RCA, Dave Cobb suggested we do it right after the breakdown. So, we went straight into the fast part, and I just started doing the guitar solo over it. It was one of those things where we were jamming around, trying to fish out the arrangement, and it just happened.”

The album also marks Slash maiden project under the newly-formed Gibson Records, an extension of this guitar-maker's brand where Slash has had a long-standing partnership with.

“It’s an honor to be the first release on the new Gibson Records. It’s a zenith in our partnership for sure and having worked so closely with Gibson for so long, I know they will be a label that genuinely supports their artists creatively. Not just me, but all the artists they choose to work with. It’s perfect.”

Slash is best known for his guitar god stature and lead guitar duties with Guns N' Roses. He is known to always secure a spot in the 'best guitar players of all time' lists of Time, Rolling Stone, Guitar World, among many others.

Usher in 2022 with a bang and awesome slashing riffs that can only be wielded by the guitar power of Slash & Myles Kennedy and The Conspirators. Lock in your tickets now!