His lifetime contribution to music is unparalleled. Yet, here he is, still at the top of his game, relentlessly touring and entertaining audiences with his timeless hits that defined a generation with a sound that became the embodiment of R&B-soul-pop music. Smokey Robinson is still setting emotions ablaze as he hits the live concert stage. Catch this legendary soul man, live. Relive that Motown vibe as he hits the Paramount Theatre Seattle on Friday 3rd December 2021. Tickets now on sale. Get your tickets now! 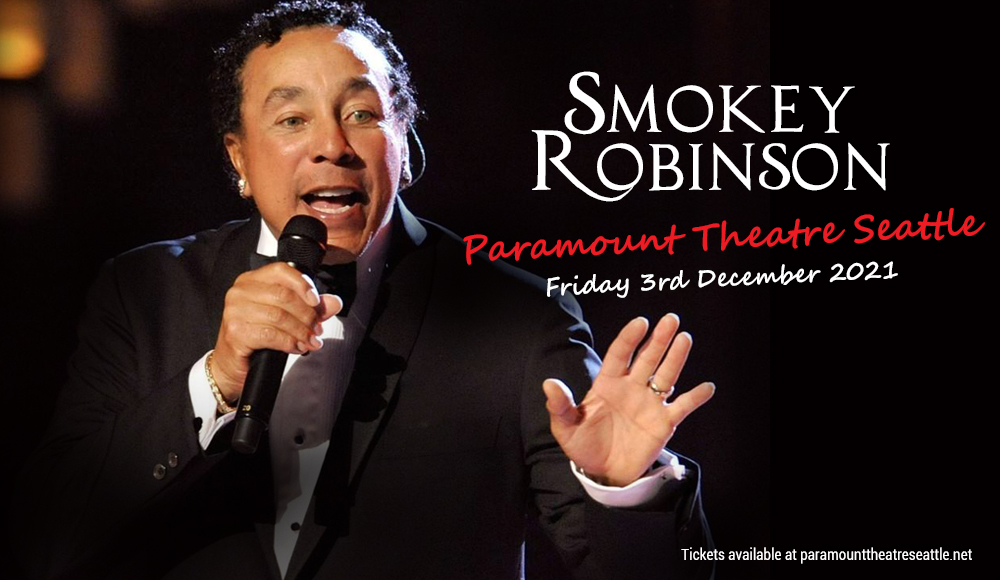 William "Smokey" Robinson Jr., or better known as the legendary Smokey Robinson is soul music's renaissance man. He founded and fronted the Motown vocal group the Miracles, a.k.a. Smokey Robinson and The Miracles, from 1955 to 1972, for which he was also chief songwriter and producer. In 1972, when he announced his retirement from the group to take on and focus on his role as Motown Record's vice president. Between 1960 and 1970, Smokey Robinson and The Miracles would produce 26 top forty hits including several top ten hits such as "You've Really Got a Hold on Me", "Mickey's Monkey", "I Second That Emotion", "Baby Baby Don't Cry" and the group's only number-one hit during their Robinson years, "The Tears of a Clown".

Smokey Robinson also was a brilliant and prolific tunesmith who wrote and churned out his for other Motown artists, s "Two Lovers", "The One Who Really Loves You", "You Beat Me to the Punch" and "My Guy" for Mary Wells; "The Way You Do The Things You Do", "My Girl", "Since I Lost My Baby" and "Get Ready" for the Temptations; "Stillwater" for the Four Tops; "When I'm Gone" and "Operator" for Brenda Holloway; "Don't Mess With Bill", "The Hunter Gets Captured by the Game" and "My Baby Must Be a Magician" for the Marvelettes; and "I'll Be Doggone" and "Ain't That Peculiar" for Marvin Gaye.

He made a solo comeback with the release of the eponymous Smokey album, in 1973. He released a slew of albums and hit songs which include "Just to See Her" and "One Heartbeat", landing at the Top 10 on Billboard's Pop, Soul, and Adult Contemporary charts. "Just to See Her" also gave Robinson his first Grammy Award in 1988; and making it one of his most successful sellers, raking in over 900,000 copies sold in the United States alone.

Once pronounced by Bob Dylan as America’s “greatest living poet,” fellow iconic artists and legends cite Smokey Robinson as one of the biggest influences in their sound and music careers.

Motown lovers, R&B-soul-pop music fans are definitely coming together to celebrate this highly esteemed and remarkable artist. Save the date and book your tickets now!