Grammy Award-winning R&B performer Thundercat comes to Paramount Theatre Seattle on Saturday 4th December 2021 as part of his It Is What It Is Tour! The talented singer, songwriter, musician, and producer will be performing from his critically acclaimed 2020 album, which appeared on many of the year's 'Best Album' lists and which fans will be itching to see live! The Flying Lotus and Kendrick Lamar collaborator will be bringing Compton singer and rapper Channel Tres as his opening at, and may even be joined by some special guests for the show! 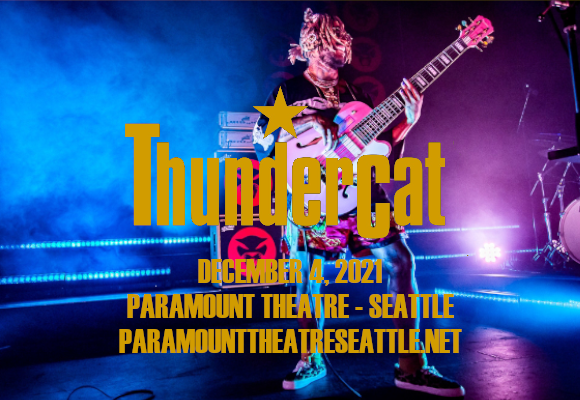 Bassist, singer and songwriter Thundercat first became known in the industry as a member of crossover thrash band Suicidal Tendencies, performing with them from 2002 – 2011. As a session musician, he has been lauded for his work on Kamasi Washington's Live at 5th Street Dick's and The Proclamation, Erykah Badu’s New Amerykah (2008), and Flying Lotus’ Cosmogramma (2010). In 2011, he released his debut solo album,  The Golden Age of Apocalypse, featuring production from Flying Lotus. 2015 brought Thundercat a new level of fame when he featured heavily on Kendrick Lamar’s album To Pimp a Butterfly… and in 2016 won a Grammy for Best Rap/Sung Performance for his work on the track "These Walls" from the album, which was also nominated for the Album of the Year award. To date, Thundercat has released four solo albums, in addition to his work with other artists. His latest album, 2020’s It Is What It Is, won Best Progressive R&B Album at the 63rd Annual Grammy Awards.